We're in love with ideas. The more ideas we have, the better our innovations. Alas, not all ideas are equal. Because too few of us are unreasonable.

Whether for products, services, processes, or business models, two levels of innovation are possible: improvements and new directions. It won’t surprise anyone that iteration and removing friction falls in the former category, while a disruption or a breakthrough will fit the later. The safety and predictability will be in making what we have more efficiently. New direction are often unproven, without example or precedent. A new direction may not bring its potential improvements right away. Our risk aversion will always find the familiar to be the reasonable choice to make. When new directions are unproven and untested, how can we explore the potential of possibilities?

As with all other sports, high jumpers have become taller, stronger and fitter. By learning from those before them, today’s track and field participants have improved techniques. For the high jump event it literally raised the bar in this sport. The most remarkable improvement in the high jump competition happened in the 1960s. In the first half of that decade, the world record got improved no less than seven times.

Something new or disruptive most have taken place. Something like the “Fosbury Flop”–a radical new technique for the high jump that the American Dick Fosbury pioneered. It’s radical in that it took the opposite approach to the accepted technique. Convention saw jumpers apply the “Straddle Jump” where you leap off the inner foot and cross the bar, face down, with your legs straddling it. The Fosbury Flop has a jumper take off from the outside foot, immediately turning his back to the bar, leaping head first and facing skywards, kicking his legs up and over, as his back clears the bar. Everything about it is different when compared to the Straddle Jump. Most of us are familiar with the story, or have seen the somewhat awkward way of straddle jumping versus the elegance of a Fosbury flop. Surely it is this new technique that lead to the dramatic improvements and new world records, right? Except that it didn’t.

Today, the Fosbury Flop is the better technique, rendering the straddle jump obsolete. But it wasn’t the reason the high jump record improved seven times in three years. This rapid increase of the world record, from 2.17m in June 1960 to 2.28 in July 1963, was the outcome of an intense rivalry between American John Thomas and Russian Valeriy Brumel. And both used the established straddle jump technique. Their rivalry culminated at the 1964 Tokyo Olympics, where both jumped the same height, but they awarded Brumel gold because of fewer failed jumps. The rivalry pushed both men to improvements, resulting in better performances and world records.

At the time of the Tokyo Olympics, Dick Fosbury was a seventeen-year-old student, and a talented, but rated ‘average’ athlete. His personal best was 2m, or 28cm under Brumel’s world record. Fosbury achieved this personal best using a never seen before technique. It is unclear what inspired him, or why he did this. He was going against every piece of advice his coaches gave, all trying to steer him back to the proven straddle jump technique. Fosbury received several warnings from them to stop doing this ‘dangerous nonsense.’ Jumping head-first was seen as reckless and counterintuitive.

Despite the criticism Fosbury persisted and made the Olympic Team for the 1968 Mexico City Olympics. He lined up against all other athletes - every one of them using the traditional Straddle Jump. And then proceeded beating them all with his unreasonable backward jumping technique which now bears his name. But here is the thing; he won the gold, but even his best jump was still well below world-record height. In fact, Fosbury never broke that 2.28m record. In the years that followed the 2.28m record got bettered by other athletes, some using the Fosbury Flop, others the Straddle Jump. It wasn’t until the 80s that the Fosbury flop became the norm for this discipline.

To me, this story illustrates two things. First, just how non-linear the process of innovation is in real life. And second, that status quo changing innovations need a maverick who flaunts conventional wisdoms, redefines the box as to think outside off, while having the resilience to hold true to his or her vision. It took several years of unrewarded, unappreciated effort from Fosbury. No one taking him seriously, all wanting to advise him to change his ways. Even after winning that gold medal, the merits of his technique, his innovation, took decades more to become clear. Today, the technique has seen a human clear 2.45m on the high jump, the current world record held by Cuba's Javier Sotomayor.

Game-changing innovation is hard for a reason. And that is because we rate ideas and ambitions with reason, with what appears acceptable to us. That what is familiar brings nothing new. The quality of a new idea is that it first emerges as unreasonable. And that the mavericks who proposes and fights for such ideas appear equally unreasonable in doing so. Those who fight their own corporate legacies or the entrenched norms of the marketplace. It doesn’t matter how perfect the conditions favoring innovation are, you still need someone to take the lead and recognize when it becomes possible. Despite all gravity weighing down against them or their vision.

Thomas H. Huxley, an English biologist and anthropologist specializing in comparative anatomy, is said to have exclaimed after reading On the Origin of Species, written by Charles Darwin, “How stupid of me not to have thought of this.” So why didn’t he? There is difficulty in thinking of an idea even when all the facts are on the table. Ask anyone who partakes in ‘brainstorming.’ You may not be familiar with the name Alex Osborn. Perhaps it helps if I clarify that he represents the ‘O’ in ‘BBDO’, a worldwide advertising agency network, with its headquarters in New York City. The origins of this agency see it start in 1891, as the Batten Company, but the final naming came about when in 1928 it merged with BDO. It is Alex Osborn that is credited for the term ‘Brainstorming’ when, in 1942, he authored the book “How To Think Up”. He furthered the technique in his books Your Creative Power and Applied Imagination, in 1953.

Osborn positioned ‘brainstorming’ as a group creative technique aimed to find a solution to a specific problem by gathering a list of ideas spontaneously contributed by the members of the group. The technique hinges on removing inhibitions to have a group of people meet as to generate new ideas and solutions around a specific problem or interest domain. Osborn had grown frustrated by BBDO employees’ inability to generate creative ideas individually for the advertising campaigns someone commissioned them for. He first termed this group process as “organized ideation” and later dubbed it “brainstorm sessions”.

One of the key principles that Osborn declared was that the group needed a clear statement of the problem they are to address, and that this problem should be simple, and narrowed down to a single target or aim. In 1953, Osborn noted that brainstorming is not effective in complex problem spaces. Today, the vast majority of our brainstorming yields nothing, because most of us are doing it wrong. I will not state it doesn’t work, because it does. When you use the technique the right way, at the right time, with the right people. When that doesn’t happen, brainstorming is not just a waste of time, it is counterproductive.

Great ideas are founded in making cross-connections between the known facts. Making these requires daring. It requires being more unreasonable. It must, for any cross-connection that does not require daring is likely already performed by many and develops not as a “new idea,” but as a mere “proof of an old idea” or an improvement of one. Improvements are novel solutions that better satisfy existing definitions of value. Whether incremental or radical, they address already widely recognized problems in the marketplace. In contrast, new directions arise from reinterpreting the problems worth addressing. And redefine what customers could value.

Generating lots of ideas works well for improvements, but it won’t do much to spot new directions. If companies don’t change the lens through which they assess ideas, they won’t be able to identify the new directions they should seek. If someone offers them these possibilities, they wouldn’t know what questions to ask them, or recognize the meaningfulness of these.

It is only afterward that a new idea seems reasonable. Any new idea usually seems unreasonable when first formed. New ideas feel off, sometimes even counterintuitive. To suppose the earth was round instead of flat, or that it moved around the sun, or that objects required a force to stop them when in motion, instead of a force to keep them moving, and so on. We labeled these notions unreasonable and counterintuitive. Explicitly question existing assumptions about what is meaningful or valuable, and what is not. Others will never consider a big idea reasonable to anyone else because they can’t see it like you do, so why bother worrying about it? Most people’s definition of reasonable is completely useless for any kind of new or interesting idea. It’s far more important that your big idea is reasonable to you. That means you need to be able to look at it yourself and say, “Yes, this is possible.”

If an idea is not an unreasonable first, it’s likely more an improvement only. And not an actual idea. Unreasonable people may come across as counterintuitive, but they are innovation’s greatest assets. 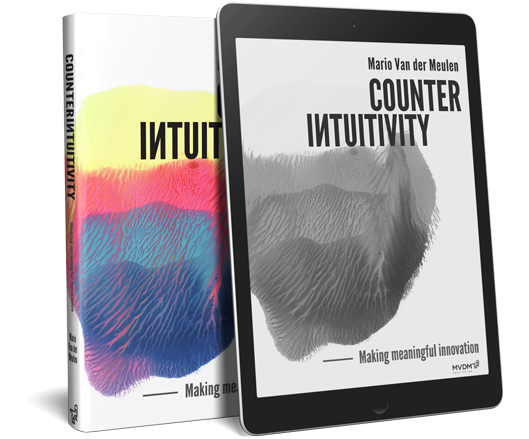